The Miss Merion Bluegrass is a 7-litre class hull originally owned by Fred Rogers and Earl Wham of Spokane, Washington.

In 1963 Fred and Earl won the Little Diamond Cup in Coeur d’Alene with the 266 Hydroplane named Holy Smoke. That race they beat all the blown 7-litre boats. In 1964 Fred and Earl received a call and were told that the Little Diamond Cup race was going to be held for 7-litre boats only, during the 1964 race. The team didn’t have much time. They had recently purchased the Miss Merion and were in the middle of getting her ready for racing and the new engine was not built. The engine from the Holy Smoke had recently been rebuilt and was hanging on the hoist. The team decided to put the 266 engine in the Miss Merion Bluegrass and 5 days later they entered the race and won the Little Diamond Cup.

After the first race the Miss Merion Bluegrass team began building a new 7-litre engine and working on the boat while leading the way in innovative design changes that were ahead of their time. It was those changes and Earl’s driving skills that took the Merion to a victory on many occasions.

Fred and Earl owned and operated the Miss Merion Bluegrass from 1964 to 1971. During that time they achieved numerous victories while having a good time and building on an everlasting friendship. Listed here are just a few of those wins:

Becoming the world’s straightaway record holder in 1967 at Devils Lake, Oregon was yet another one of the notable achievements of the Miss Merion Bluegrass team.  The one-kilometer record was broken when the boat made two passes at an average speed of 159.217 miles per hour.  This new speed beat the previous mark of 153.746 miles per hour set in 1965. 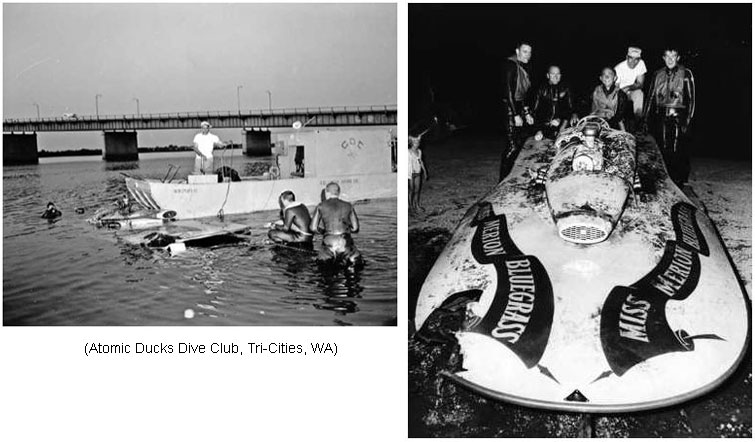 While in Miami for the Orange Bowl Regatta, January 1969, the Miss Merion Bluegrass was stolen from a motel downtown where the team stayed. Later that day the boat was found abandon without the engine which was later recovered. Both times the team pulled together to put her back in top notch condition and positioned the Merion to win many more races.

These early hydroplane races were a family affair for the Rogers, Wham and Schultz families. When the boys went out to race they brought along their troops which included their wives, children, grandparents, and friends who supported and admired the accomplishments of the team.

It is these early memories and admiration that has led Kirk Rogers with the help of many other supporters to pay tribute to the men who made this boat a legend by reconstructing the boat in their honor.

The legend has returned!